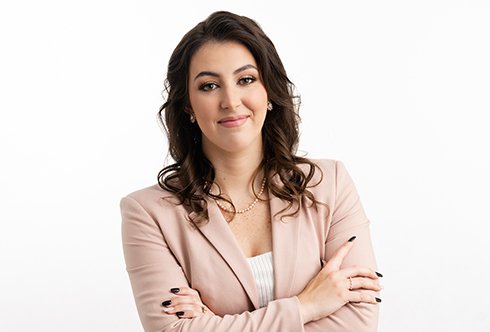 Ashley D. Hall was raised in Miami, Florida, until the age of 14, then moved to Holiday, where she graduated high school. She attended the University of Central Florida, where she received a Bachelor of Science in Psychology and a Certificate in Behavioral Forensics. She attended Florida State University, School of Law, graduating and being admitted to the Florida Bar in 2019.

During her time in law school, Ashley completed two internships at the Public Interest Law Center: the Family Law Clinic and the Children’s Advocacy Clinic. In her second year, she completed her externship at the Federal Public Defender’s Office, Capital Habeas Unit, assisting with death penalty appeals.

Ashley began working as a law clerk at Fournier Law in 2018, under the guidance of the founding partners, Patricia B. Fournier and Gena D. Fournier. Witnessing the Fourniers in action inspired her to someday become a tenacious advocate for families and helped her to find her passion for family law.

For family reasons, she relocated to Naples, Florida, leaving family law behind, and began working as an Assistant Public Defender in the 20th Judicial Circuit. As a litigating public defender, she gained invaluable courtroom experience and managed a heavy caseload while still caring about her clients on an individual level. Her experience at the Public Defender’s Office gave her vital insight into the interdisciplinary nature of criminal and family law.

Because of her desire to return to the practice of law, Ashley worked as an associate attorney for the Family First Legal Group in Naples, Florida, passionately advocating for people who are going through the most difficult times of their lives. Because Ashley missed the family she had made at Fournier Law and they had an open door for her, she and her fiancé, Brian, and their rescue dog, Henry, moved back to Tallahassee.

Since rejoining the Fournier Law family, Ashley has taken a particular interest in the most challenging cases and has a desire to help people who may not have the courage to stand up for themselves. She helps parents, spouses, and families envision their new normal outside of the legal process.

When not in the office, you can find Ashley spending quality time with Brian and Henry. She is an avid gym-goer, enjoys concerts, and likes to watch a good baseball game.

Get the Legal Guidance You Need.

Call or send us a message today.

Thank you! Your submission has been received!
Oops! Something went wrong while submitting the form.